You may have seen last year’s photo of our first homebrew cheese press. As awkward as it appeared, it was actually doing a fine job of squeezing that leftover whey out of the cheese. It was gouda. And it did taste good. There was just this small problem that a pregnant fly had made her way through the protective colander as the cheese sat drying and laid her plethora of eggs right there in our first homemade aged cheese. I sliced off a sliver of the side that was not so maggot-ridden just to have a taste. It was going to be good. But it ended up going to the chickens, since they actually enjoy eating maggots, unlike us so-civilized human creatures.

Brandi had recently checked out a cheese making book from the library and I found it lying around one day when the fridge was overflowing with milk. Within it’s bountiful pages sat a recipe for “White Goat Cheddar” and it sounded like a good thing to try to mess up.

The recipe was quite simple: 1 gallon of pasteurized goat milk, 2 tablespoons of mesophilic starter culture, 3/4 teaspoon of rennet, a bunch of time spent stirring and watching a pot of simmering milk and the resulting curds, and a cheese press.

While the recipe was simple and seemed near at hand, we had none of the prescribed ingredients. Our goat milk is raw, we had only packages of “direct set” mesophilic bacteria and extra concentrated vegetable-based rennet, and nothing resembling a classical cheese press. We did have the time to do it, since time really does count as an ingredient. Confident that we could do just fine with what we had on hand, I dumped a gallon of raw goat milk into a makeshift double boiler and put the process in motion.

The book went so far as to give time figures for how long it should take for the milk to heat up, the culture to ripen the milk, the rennet to set the curds, and the curds to drip away the rest of the whey. It was kind of the author to provide these guidelines, but reality didn’t quite unfold in the same timeline. Even so, raw goat milk turned into a very rubbery cheese-like substance throughout the course of the day, and before long, the time came to figure out just how we were going to apply 40 pounds of pressure to this lump of fermented sludge in order to send it on its way to becoming cheddar cheese.

I enlisted Leelu to help me figure it out. After exploring the options of placing ancient dirty bricks or a 5 gallon bucket of sand atop the cheese-to-be, Leelu found a bungie cord in the van. That discovery sped through my mindspace and led me directly to consider the multitude of ratchet straps that are generally hiding in every vehicle we own. We found one there in the van and joyfully trodded back to the kitchen, intent on victory.

A quick assessment of possible accomplices in our daring mission provided a pair of pot-shaped colanders to hold the cheese and let the whey drain away. The next missing piece was a way for that ratchet strap to apply the needed pressure (that we would never measure to assure it was providing 40 pounds worth…). A log? No, too dirty. A bit of dimensional lumber? Alas, the clean ones laying about were too short and/or skinny to get the job done. What about that flour crock that’s not holding flour? Eureka. And we found our cheese press. 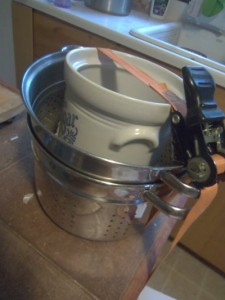 It may not be quite as pretty as those professionally built presses one may purchase from your local homestead supply store, but it is a bit of an improvement over our first attempt of home-pressing cheese. The major flaw in the current design is that there is no lateral limit to the squashing of the cheese. We end up with a fat pancake of cheese, rather than a finely formed wheel. Homebrew Cheese Press v.3.0 will attend to this situation, but for the moment, we continue to squash the cheese with this crock and look forward to enjoying the consumption of said squashed cheese in a month or so, after it has aged its way into a semblance of cheddar.